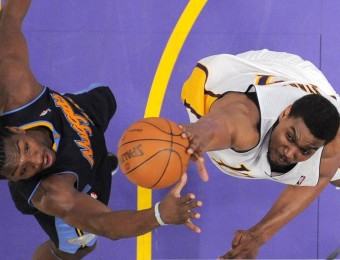 LOS ANGELES: Q. Andrew, how do you feel so far... more

LOS ANGELES:
Q. Andrew, how do you feel so far after this first month of the regular season?
A. I feel good. My knee has healed a hundred percent, so I’m fine. I definitely want to get more involved offensively by playing in the paint.

Q. At the moment, the Lakers are beating everybody in this league, no matter if they play other title contenders or teams with a losing record. Do you find any problems with motivation for opponents like – with all due respect – the Sacramento Kings or the Clippers?
A. No, not at all. In the first three years of my career we had [ motivational ] stuff like that and we were losing to teams which were under five hundred. I think the Charlotte Bobcats still have a winning record against us since I started playing for the Lakers in 2005. We never carried this type of focus. Plus everybody on the team still has that taste of last year, when we lost the NBA Finals. Phil Jackson always says “We are taking one game at the time”. It almost sounds like a mantra, but it’s so true. We shoot around in the morning, go over what the team has to offer and then get through the training”.

Q. You’re currently beating other teams with an average of more than 10 points. Is it getting repetitive?
A.What do you mean by repetitive? That it feels easy? No, it’s definitely not getting easy. It’s just a pattern that we have to run. Right now, we are not even doing so great defensively; we have to fix some things, like preventing the opponent to drive inward and getting easy baskets in the paint.

Q.Phil Jackson joked that he’s hoping you’re not starting to bore the customers…
A.We definitely do care about our customers. In the big games, the competition will be tougher for us, so probably they will enjoy those games a bit more. I’m just kidding.

Q. Do you feel that you are getting into a pretty good rhythm? You did have a couple of double-doubles in last few games…
A.Yeah, I’m getting more comfortable day by day. I’ve been sidelined for a long time, so it takes a while, but hopefully at the end of the season I will play even better than I did last year.

Q.Is it hard sometimes to build up this rhythm because you have now some many guys on the team who can get down there with so many different weapons?
A. That’s a major difference. We can share the ball and we’ll beat anybody with this kind of passing, but you might go to stretches like five minutes without even once touching the ball. It’s all because we have so many options in our game plan and getting used to it is different.

Q Is there something of a confidence issue?
A.The confidence is always there because I never lost any of my skills. I’m trusting my leg and it’s been fun so far.

Q. How are you doing as far as establishing a strong post position? That’s something that Phil Jackson always emphasizes…
A.I think I’m doing allright. Sometimes I catch the ball too deep and try to shoot jump hooks, but my understanding of the post game is getting better.

Q.How do you find yourself playing together with Pau Gasol? It’s a brand new experience for you and something the Lakers fans were waiting for for months…
A. It’s all fine. Whoever gets the block first, keeps the low position. Other teams have trouble with that because they’re going to have to double team and we can take advantage of that. Beside that, I can go and play with the second unit and so does Pau. So there are plenty of options.

Q. Do you think you can supplement each other while playing together at the same time?

A. Yes, because it’s hard to double team either one of us. It will result in easy baskets.

Q. Is watching Kobe Bryant playing at such a high energy level after spending his summer with the national team inspiring for the rest of the team?
A. Most definitely. Kobe’s a machine. He always goes in first and is the last one to leave the training, so he’s absolutely prepared for it.

Q. You’ve just signed a new contract with the Lakers for the next four year which means you will stay in L.A for a while…
A. I’m very happy with it. This deal gives me and my family financial security and I enjoy every moment in the Lakers uniform. It’s a perfect situation. I hope I will win many championships with this team and I’m ready to take on the revenge. It was so painful watching my team lose the NBA Finals to the Celtics, knowing that I could help to fill in some gaps, provided I had been healthy. Hopefully there will be a lot of great moments for this organization in the nearest future.

Martin Harasimowicz is a recent transplant from Warsaw. As a Los Angeles based s...