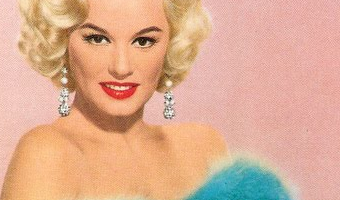 Legendary movie actress Mamie van Doren survived her peers, ‘50’s icons Marilyn Monroe and Jayne Mansfield, together called The Three M’s. At the age of 78, Van Doren (Rowena, North Dakota, 1931) is alive and kicking. A few years ago, the fierce advocate for free speech posed nude for the Playboy as the oldest model ever. She blogs, bikes and still loves to go to the movies. “If Hollywood ever decides to turn my life into a movie, then Scarlett Johansson can play me”.

British actor Alan Rickman embraces his artistic freedom Hollywood’s notorious bad guy is pure British. His iconic roles as Hans Gruber in Die Hard, the Nottingham Sheriff in Robin Hood: Prince of Thieves and as Severus Snape in the Harry Potter series have made him a media darling. “All that newly found fame has given me the artistic freedom to participate in a comedy like Love Actually, the movie version of Sweeney Todd and many theatrical roles in England”.