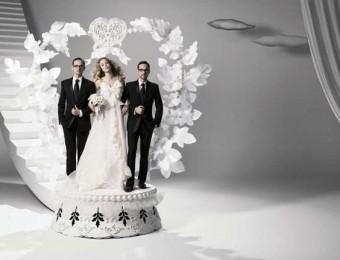 HOLLYWOOD – On February 22, 2009, the 81st edition of the Academy Awards will take place at the Kodak Theatre in Hollywood. While ‘Oscar Fashion Fever’ will hit Hollywood weeks beforehand, Oscar winning animator Suzie Templeton looks back on the 2008 edition when she received the golden statuette in a flaming red dress by designer Percy Irasquin. The flamboyant Aruba-born designer passed away unexpectedly last August.

“I first met Percy in February 2008 when I was looking for a dress for the Academy Awards Gala”, Suzie Templeton tells. “When I was visiting his studio, he asked me which colour I had in mind. When I answered ‘red’, he suddenly showed excitement in his eyes, rushed over to the rack with dresses and handed me a red creation. When I tried it on, it fitted me perfectly. I was so impressed by the design that I didn’t try on any other dress. Percy was happy and relieved at the same time. He told me that he would have designed a dress especially for me had I not been able to choose. The only problem was that I had to leave for Los Angeles in two days. He was ecstatic that one of his creations would be seen on the red carpet at the Oscar Gala. Afterwards he told me that when my name was announced, it felt as if he had won the golden statuette himself”.

Templeton has special memories of the ‘real Irasquin’ she wore at the gala. “I felt beautiful in Percy’s dress, as if I were an actress from the Fourties era. I flew with Dutch airline KLM to Los Angeles and the crew treated me like a movie star because I carried a real Irasquin bag. During the gala at the Kodak Theatre many people came up to me , telling me that they loved my dress”. The director, writer and animator returned the couture dress afterwards, but cherishes the many pictures of the Gala Night which form an unforgettable memory. She remembers Percy Irasquin as an ‘absolute sweetheart’. “He was a warm and generous personality who was full of life. I prefer to remember him the way I saw him at work in his studio. He was working on his new collection and had a very intuitive way of designing that reminded me of sculpting: he pushed, folded and shaped the cloth around a body in a manner I’ve never seen before. I found him inspiring because of his artistic gift and will always remember him that way”.

Bambi Bogert was born in Brooklyn, N.Y., and spent years living and working in E...